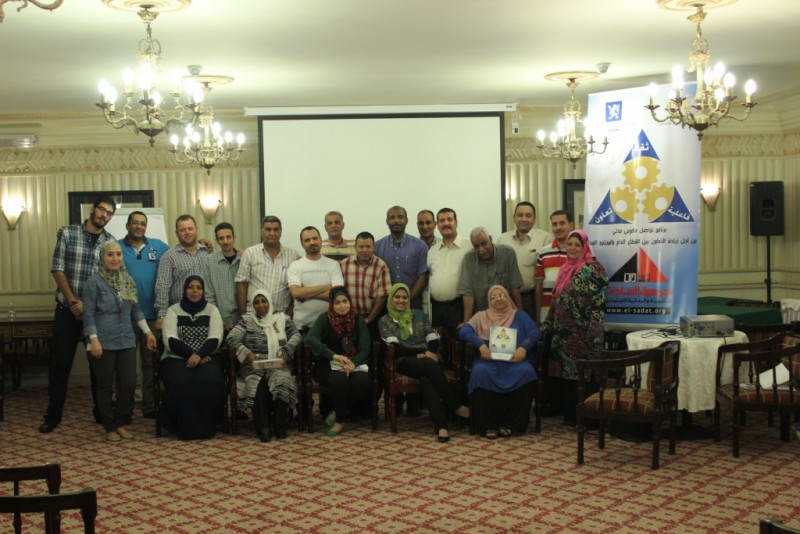 Description: The Tawasol program’s main objective is to establish dialogue and cooperation between civil society and the public sector with an emphasis on building strong partnership between both sectors and other relevant stakeholders such as donors and the private sector.  El Sadat Association capitalized on the credibility it has with different stakeholders, especially with the government whose trust is often most difficult to gain, to bring them all to a dialogue. .

The project was implemented on two phases.

Phase I, (dialogue & planning): bringing together CSOs, public sector, private sector and funders to identify obstacles to cooperation, plan how to resolve them, and identify how to move forward together. A cadre of Ministry of Social Solidarity (MOSS) employees from governorates across Egypt was trained to adopt and subsequently promote communication that is more effective and conflict resolution practices in their working environments. The Public Sector-Civil Society Network was established to act as a mechanism for ongoing communication between the sectors, and play a mediating role when necessary.

Phase II, with the Ministry of Social Solidarity, El Sadat Association intensified its efforts with a set of MOSS employees who will continue after program ends as Trainers-Advocates, or trainers and leaders for their peers both in the public sector and in civil society. ESA targeted 60 employees to be advocates or trainers from the 26 governorates all over Egypt who work in public sector.

Achievements:  60 employees from Ministry of social solidarity from greater Cairo, Nile delta & Upper Egypt were selected to participate in TOT training program to act as leaders and advocates for greater cooperation between the public sector and CSOs. 12 forums brought together the aforementioned CSOs, local & international donors and civic servants to participate in constructive dialogues to tackle challenges such as government outreach, the draft of NGO law, Entrepreneurship, real role of CSOs & the effectiveness of establishing a network of political participation of youth. 10 networking meetings held to define the rules and regulations, membership and the hierarchy election system set by the members.