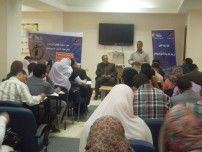 Description: This project seeks to strengthen the rule of law in Egypt by advocating for cultural and legal changes, empowering rural legal advocates, and building a foundation for long-term structural and systematic changes. Through a 14-month program, a series of varied activities have been implemented including workshops & legal training, network building by and between local legal advocates, rural-urban knowledge exchange, work placement, the creation of watchdog units, and research culminating in final constitutional recommendations.

Achievements: The legal training workshops and the legal research competition played a big role in changing the legal and political culture for the rural lawyers. As demonstrated by the surveys administered, rural lawyers' knowledge and capacity increased due to open discussions in the workshops and comments from academic professors and workshops facilitators on current events.

In addition, having a structured format to practice the skills learned, as well as the close monitoring of academic professors and facilitators, empowered participants as rule of law advocates. These trainings directly contributed to the ability of the participants to carry out the legal study (legal research competition). Rural lawyers established partnerships with groups of activists in Cairo to advocate on the rule of law and human rights issues in the Constitution, resulting in strong cooperation between rural lawyers and the urban-based legal advocates. These partnerships also included human rights activists, NGOs, and representatives of political parties.